The problem? Glyphosate has been linked to cancers, particularly non-Hodgkin's Lymphoma. 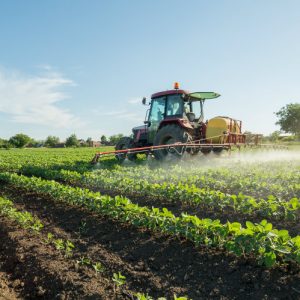 In the 1970s, Monsanto Corporation developed glyphosate, a chemical that works specifically to block an enzyme that plants need to survive. Then, in 1974, Monsanto commercialized glyphosate, marketing it as a broad-spectrum herbicide.

Roundup, the world’s most popular herbicide, is a type of weed-killer and pesticide manufactured by Monsanto that has been around since the 1970s. Glyphosate forms the active ingredient in Roundup.

Roundup is used in many backyards and gardens; however, it is most often used in commercial agriculture where it is sprayed over crops like alfalfa, canola, corn, cotton, sorghum, soybeans and sugar beets.

In the mid-90s, Monsanto introduced “Roundup Ready” crops that were genetically engineered to survive the weed-killer. That meant farmers could spray Roundup over their entire crops and fields to control the weeds without hurting their crops.

In its March 2015 report, the International Agency for Research on Cancer (IARC) wrote, “Glyphosate currently has the highest global production volume of all herbicides. The largest use worldwide is in agriculture. The agricultural use of glyphosate has increased sharply since the development of crops that have been genetically modified to make them resistant to glyphosate.”

In March 2015, the cancer-research agency of the World Health Organization (WHO) declared Roundup a “probably human carcinogen,” with NHL being the most likely form of cancer, based on findings from a number of studies, including:

These studies found higher rates of this cancer in farm workers who were exposed to large amounts of Roundup.

In 2014, a study by French scientists linked occupational exposure of glyphosate to NHL, finding that people who work with or around the chemical were twice as likely to develop NHL.

What is Non-Hodgkin’s Lymphoma?

Non-Hodgkin’s Lymphoma (NHL) is a cancer that can start nearly anywhere in the body. It is a blood cancer that grows in lymphocytes, which are white blood cells in the immune system that help the body fight diseases.

The most common early warning sign is an enlarged lymph node that creates a painless bump on the neck, armpit or groin. While not all lymphomas cause symptoms, possible signs include:

Monsanto is facing a growing number of lawsuits for downplaying this risk.

Plaintiffs claim Monsanto had a responsibility to warn consumers and regulators about the risk of non-Hodgkin’s Lymphoma from exposure to Roundup.

If you or somebody you know has been diagnosed with cancer or non-Hodgkin’s Lymphoma that you believe may have been caused by exposure to Roundup, contact one of our attorneys today for a free, no-obligation review of your case.