According to the NHTSA, an estimated 37 million vehicles are currently under recall for approximately 50 million defective air bags manufactured by Takata because of the potential for these airbags to explode, spraying metal shrapnel into drivers and front-seat passengers. 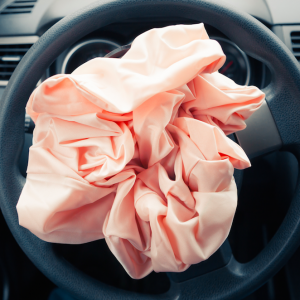 Takata Corporation, one of the largest suppliers of airbags for the automobile industry, is believed to have sold defective airbags to numerous different automakers going as far back as 2001.

The defective airbags use a chemical propellant that has a tendency to deteriorate over time, especially in heat and high humidity. What happens is that as the propellant deteriorates, excessive pressure builds up in the metal inflator housing. It then ruptures, spraying metal shrapnel into the vehicle’s driver and front-seat passenger. Sometimes the airbags deploy without any warning.

Vehicle owners can use NHTSA’s Recalls Lookup Tool to check their Vehicle Identification Number (VIN) for any open recalls, including Takata recalls.

On October 22, 2014, the NHTSA issued a Consumer Advisory urging owners of potentially affected vehicles to act immediately on any recall notice received to replace the defective airbags.

According to the Advisory, “Responding to these recalls, whether old or new, is essential to personal safety and it will help aid our ongoing investigation into Takata airbags and what appears to be a problem related to extended exposure to consistently high humidity and temperature.”

According to the NHTSA, “an estimated 37 million vehicles are currently under recall for approximately 50 million defective Takata air bags that can explode when the air bag deploys, causing serious injury or even death. Additional air bags are scheduled to be recalled by December 2019, bringing the total number of affected air bags to around 65-70 million.”

Although the first reported incident occurred in 2004, the first recall wasn’t issued until 2008 when Honda recalled approximately 4,200 vehicles.

Takata Airbag Recall: What You Need to Know

Takata supplied these defective air bags to many vehicle manufacturers for years, thus creating one of the largest and most complex recalls in U.S. history, making the Takata Airbag recall literally the largest vehicle recall in history surpassing Ford’s defective transmissions in the 1980s, which affected 21 million vehicles.

In product liability cases injuries may be the result of manufacturers redesigning a product to reduce costs. In 2001, Takata changed its original chemical propellant to something less expensive and much more unstable when in heat and humidity. Takata is the only airbag manufacturer who uses ammonium nitrate inside the metal canister that inflates the airbag.

Failure to warn is another product liability issue. Takata has been accused of knowing about this defect for several years but failing to issue a recall notice or notify federal safety officials.

A class action lawsuit filed in Seattle alleges that Takata deliberately concealed evidence of the defective airbags, that they were aware of the defect but considered it an anomaly.

According to the U.S. Consumer Product Safety Commission, 33.1 million Americans are injured by consumer products each year. The defective Takata airbag, just one of those products, is a serious safety issue resulting in serious injuries and even death.

If you or someone you know has been injured by a defective airbag manufactured by Takata Corporation, contact us today for a free, no-obligation evaluation of your case.

How do I know if my vehicle is affected by the recall?
Q
A

You can go to the NHTSA website and enter your vehicle identification number (VIN) in order to determine if your car is affected by any open recall, including the Takata air bag.